Amid a growing crisis, figures have shown that nearly 100 homeless people died in Scotland last year. And for the first time in nine years, the number of people declaring homelessness and making emergency housing applications is on the rise.

Former star of Glasgow reality TV show Glow and public figure, James English is hoping to raise awareness of the issue and change how we see and interact with people living on the streets.

The podcast host’s new documentary ‘Homeless at Christmas’ has recently been released and sees him sleep rough on the streets for a week. Filmed from the 19th to the 26th of December last year he recorded only on a Go Pro and captured the heart-breaking reality of homelessness. The documentary shows the pain and struggle homeless people go through everyday.

“Homelessness is a massive thing and we all kind of turn a blind eye to it, I’ve done my part over the years just giving a few bits and bobs, a couple of pounds, speaking to people and that was it, but for me, it just wasn’t enough.

“I wanted to show people the kind of things people go through when they’re homeless whether that’s abuse physically or mentally just through the average joe going by kicking on them and spitting on them.

“I think people had to see the full extent and what we created was something special that not only changes peoples mindsets about homeless people but their own lives because so many people live in luxury but all they do is moan and complain about pointless things when really is their life that bad?”

Not realising the full extent of what happened on the streets until he slept there, James described some of the horrific incidents: “One of the girls was raped twice in one day. There’s people getting spat on, sh*t on and peed on – even set on fire. The abuse is never ending on the streets.

“Then you’re getting offered drugs every 20 minutes. It’s like a world within a world – you don’t exist. When you’re homeless you don’t feel as if you’re part of society, so it’s easy to slip into those bad habits to forget your pain, your struggles and your worries.”

Knowing he was only sleeping rough for a short period of time helped him to cope on the streets, and every day got a little bit easier. Hoping the documentary will kick-start change, raising awareness is only the first step. 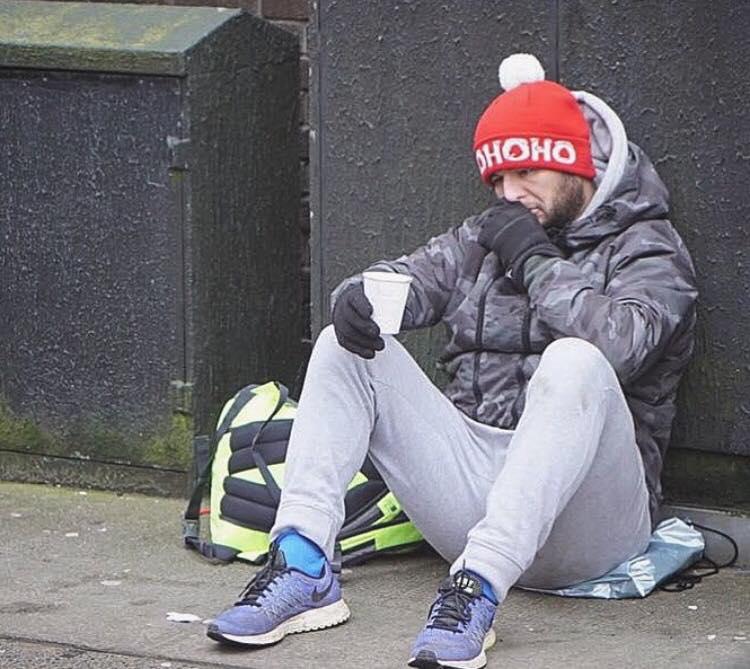 James wants to implement a 12-week programme targeted at helping homeless people change their lifestyle. Working on the theory that it takes 21 days to break a habit and 21 days to start a new one, he wants to change the mindset of homeless people. Plans for the programme would involve therapy with psychologists, teaching breathing techniques, yoga sessions and even bringing in comedians.

Believing that we should be following the lead of countries like Finland and Canada – where homeless levels are lower than ours – James is urging people to be the change they want to see.

“Obviously the government has a massive part in making change but if one person can make a change then what can 10 or 100 people do. It’s about showing people what is actually going on out there, what other human beings are experiencing. Trying to create awareness that will hopefully cause a ripple effect.”

Three people who were in the documentary sadly passed away. But others who featured managed to get help and are now doing well. 42-year-old Stuart Neillis was heavily under the influence of alcohol and drugs when he was in the documentary. Having turned his life around, Stuart is now clean and in a Christian Leadership Academy.

“I would like to say I found God, but God found me. I had been in contact with people from street connect and people from Glasgow City Missions. They’ve always helped me and supported me through everything I’ve done and they kept saying there is something better for you than living on the streets of Glasgow.

“You don’t have any hope on the streets and people aren’t interested in you. When you’re in that type of community it’s very negative. You think you’ll never get out of it. It’s a dark and scary place – it’s sleeping with one eye open and knowing who is round about you.”

Looking back on how far he’s come, Stuart finished: “It’s been a year since I was in the documentary and God’s got a gift for me. He gave me hope and a future. I’ve always had a big heart so I want to come back to Glasgow and help out other homeless people.”

Knowing that they have “already changed lives” has just made James determined to do more as he said that this was the “platform just getting built.”

Praising the work being done every day, James continued: “The charities that I came across in the documentary are the real heroes. These people are there every day and if it wasn’t for them there would be dead bodies everywhere. These people don’t get the recognition that they deserve. A lot of these charities are non-funded as well.”

A big part of the public perception of the problem is education – when people see someone homeless they don’t know what to do. Doing anything you can to help, even the smallest little thing is better than sitting back. Knowing most people opt to give a couple of pounds and some food, James suggested that having a couple of phone numbers jotted down to hand out could be of even greater benefit.

Phone numbers of homeless charities, shelters and soup kitchens are easy to obtain and could make a difference to people’s lives. So, if you’re taking the time to do your bit over the winter period, remember that a quick chat and a useful phone number could do a world of good.

The full ‘Homeless at Christmas’ documentary can be watched below.